71 Main Street in Moira, County Down, is a Georgian townhouse. It is B listed and sits at a prominent location within the Moira Conservation Area. When Anthony and Eleanor acquired the building in 2013 it was a building at risk. They recognised that the building’s deteriorating condition was having an adverse effect on the village and the conservation area.

Private owners with a track record of acquiring and saving historic buildings, the Damoglous had an eye for the heritage value of the building and its potential for re-use. Initial inspection revealed that it was in a terrible state of disrepair, having been neglected for many years. It was decided that extensive repair and restoration was required, and they believed the building had the potential to be restored into a family home.

Many of the outside walls had serious cracks and it became apparent that none were suitably secure. Mending this required innovative repair. After the project was complete the builder admitted that on the third day of working he was worried that the whole building might collapse!

The roof, ground floors and exterior walls have been repaired to modern insulation standards, traditional skills have been employed to repair or reinstate timber sash and case windows and other key features throughout. The result is a home fit for 21st century living within an impressive Georgian exterior and many other authentic features. 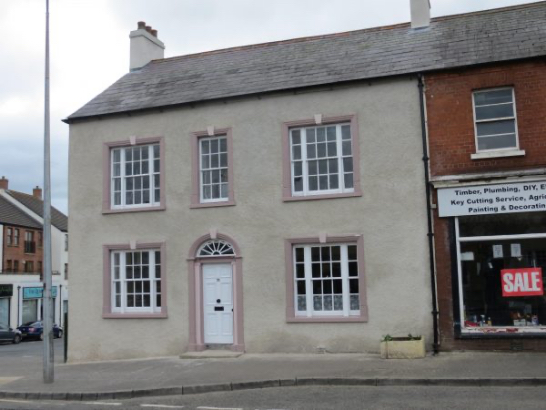 71 Main Street in Moira, County Down